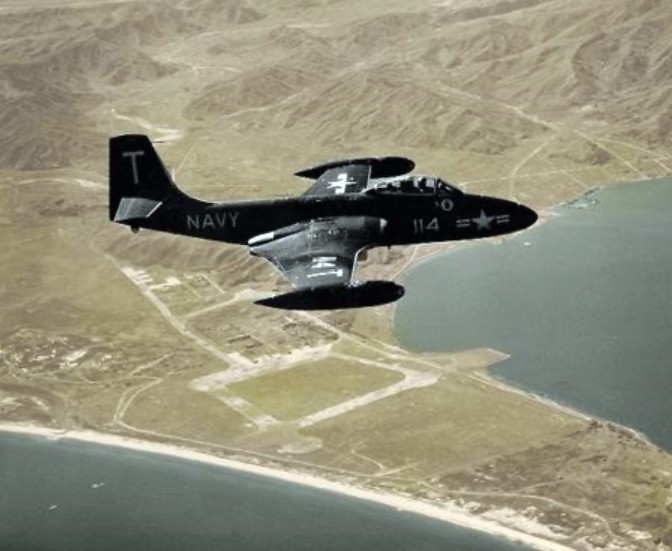 The McDonnell F2H Banshee was a single-seat carrier-based jet fighter aircraft deployed by the United States Navy and United States Marine Corps from 1948 to 1961. It was one of the primary American fighters used during the Korean War and was the only jet-powered fighter ever deployed by the Royal Canadian Navy, serving the RCN from 1955 until 1962. The aircraft's name is derived from the banshee of Irish mythology.
The Banshee was a development of the FH Phantom, although it was being planned before the Phantom went into production. McDonnell engineers originally intended the aircraft to be a modified Phantom that shared many parts with the earlier aircraft, but it soon became clear that the need for heavier armament, greater internal fuel capacity, and other improvements would make the idea unfeasible. 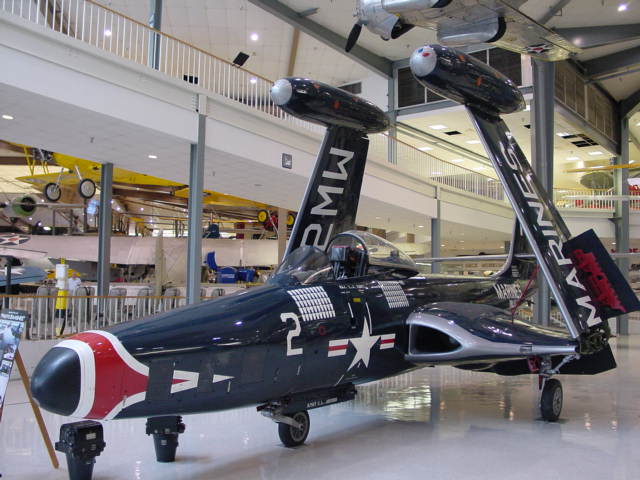 A preserved F2H-2P at the National Museum of Naval Aviation.
By Pedro Vera from Reston, VA, USA - Flickr, CC BY 2.0, Link

The new aircraft would use much larger and more powerful engines, a pair of newly developed Westinghouse J34 turbojets, raising thrust from the J30's 1,600 lbf (7 kN) to 3,000 lbf (13 kN) each; since the larger engines had to fit within the wing roots, this required a larger and thicker wing with a span of 41 ft 6 in (12.65 m) rather than the Phantom's span of 40 ft 0 in (12.19 m). The more powerful engines also used more fuel, so the fuselage was enlarged and strengthened to increase fuel capacity. Navy leaders decided to move away from the World War II standard .50-caliber (12.7 mm) machine gun to 20 mm (0.79 in) cannon; four of the guns were mounted low on the nose to prevent pilots from being blinded by muzzle flash when firing the guns at night, a problem that vexed the Phantom with its top-mounted guns. The Banshee was designed to accommodate an ejection seat, a capability the Phantom lacked, and it incorporated a large number of improvements to other aircraft systems. The cockpit was fully pressurized and air-conditioned, and the flaps, landing gear, folding wings, canopy, and air brakes were electrically rather than pneumatically operated. The front of the canopy was made of bulletproof glass that was electrically heated to prevent frost.

The aircraft incorporated a novel design feature: a "kneeling" nose landing gear consisting of a pair of very small wheels forward of the regular nosewheel. The nosewheel could be retracted so the aircraft rested on the smaller wheels, allowing it to taxi with its tail high in the air. This was intended to ease hangaring by allowing the aircraft to be parked with its nose under the tail of the aircraft ahead, thereby saving space, and to enhance safety by directing the hot jet blast upwards while taxiing. The feature was found to be of little use operationally, however, and was omitted from later Banshee variants.[4]
The XF2D-1 (later XF2H-1) in 1947. Note large vertical tailplane fairing and pronounced horizontal stabilizer dihedral. 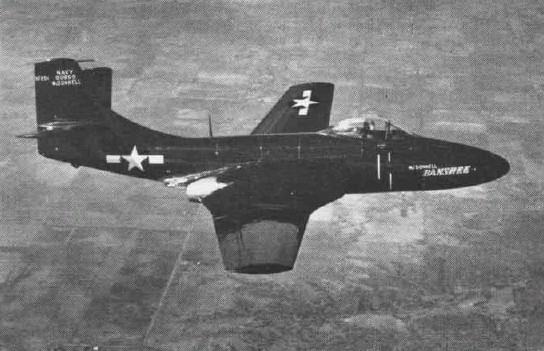 A mockup of the new fighter, originally designated XF2D-1, was completed in April 1945. The project survived the end of the war, but development work was slowed and the first of three prototypes was not built until late 1946.[5] The aircraft made its maiden flight on 11 January 1947 from Lambert Field, St. Louis, Missouri. During the first test flight, the aircraft demonstrated a climb rate of 9,000 ft/min (2,743 m/min), twice the climb rate of the F8F Bearcat, the Navy's primary fleet defense interceptor at the time.[3] The Navy redesignated the aircraft as the XF2H-1 in 1947 after it ordered a different jet fighter from Douglas, another Navy contractor that was also assigned the manufacturer's letter "D". An order for 56 aircraft was placed in May 1947.

Similarities to the FH-1 meant that McDonnell was able to complete the first F2H-1 in August 1948, a mere three months after the last FH-1 rolled off the assembly line.[7] Relative to the XF2D-1, the fuselage was extended about 12 inches forward of the wing [8] and fuel capacity was increased by 29 gallons to 877 gallons. The empennage was slightly redesigned, reducing the size of the vertical tailplane fairing and eliminating dihedral from the horizontal stabilizers. The wing- and tail-thickness ratio was also reduced to increase the critical Mach number. The F2H-1 was retrofitted with 3,150 lbf (14 kN) thrust engines as they became available

Although the Navy accepted the F2H-1, it was the more capable F2H-2 that was most widely used. With newer Westinghouse J34-WE-34 3,250 lbf (14.5 kN) thrust engines, it had significantly improved performance. The wing was modified and strengthened to add provisions for 200 gal (760 l) wingtip fuel tanks; unlike the contemporary USN F9F Panther, the Banshee's wingtip tanks were detachable. Two armament pylons were added under each stub and outboard wing, for a total of eight, allowing the aircraft to carry a maximum stores load of 1,580 lb (454 kg), consisting of four 250 lb (113 kg) bombs and four 5-in (12.7 cm) unguided rockets. The "kneeling" nose gear was omitted from the F2H-2 and most other subsequent Banshee variants.