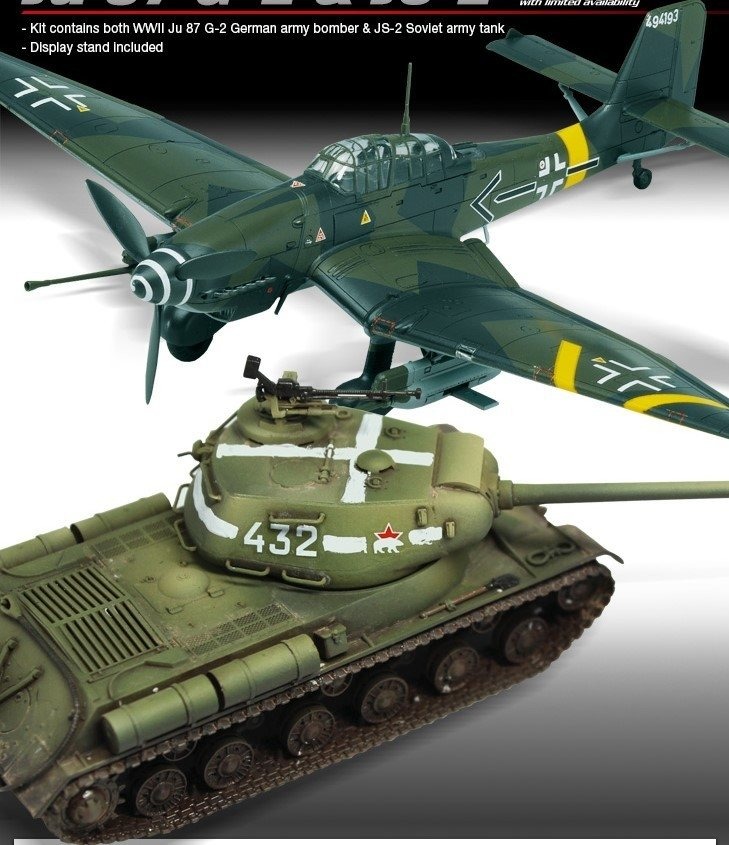 Two models in 1 kit!  Excellence in detail is a hallmark of Academy Plastic Models and this kit is no exception!

History of the aircraft modeled:

The Junkers Ju-87 “Stuka” was originally conceived as a sturzkampfflugzeug (dive-bomber) as this was greatly in vogue in Germany during the 1930s. Hitler's Reichmarshall, Hermann Goering, saw that the dive-bomber could be produced quickly and inexpensively and its crews required far less training to reach acceptable levels of accuracy in bombing. It seemed to provide the perfect solution for the Third Reich's need for lots of bombers and its failings would not become evident until it was too late.

In the opening days of World War II the Stuka was undoubtedly one of the most feared warplanes in the world. Germany did much to spawn this legend of invincibility about the aircraft. Its ugly appearance had the look of a terrible bird of prey, its spatted undercarriage gave the appearance of outstretched talons. The Stuka's role as a weapon of terror was augmented by the air-driven "Sirens of Jericho" that screamed whenever it was plunged into a dive. The Ju-87 sank more ships than any other aircraft in history, and possibly, destroyed more tanks than any other aircraft the possible exception of the Ilyushin Il-2 Sturmovik. The Stuka was capable of great accuracy with bomb placement, as longs as it went unmolested by fighters. And, due to the excellent quality of the Bf 109 fighter, the Stuka was able in the early stages of the war to maintain an appearance of "invincibility". However, during the Battle of Britain, the Stuka's vaunted reputation proved to be hollow. It was too old, too slow, and too vulnerable to modern RAF fighters to be successful as a frontline bomber. The Ju-87s were mauled so severely by the RAF in the Battle of Britain that they were withdrawn from operations over Western Europe. Thus, the Stuka's career shifted to ground attack against personnel and armor.

The most famous Stuka pilot, Hans Ulrich Rudel, destroyed over 500 Soviet tanks in 2,530 combat missions. But, these successes were not without cost. Rudel was shot down 30 times and in 1945 lost his right leg below the knee. The Ju-87-G “Tank Destroyer” was Rudel's brainchild. It was basically a cannon-armed version of the Ju-87D-5. The 37-mm Flak 18 light anti-aircraft gun was revamped to become the BK 3,7. The BK 3,7, with its magazine and long spent case ejector chute, was installed in a pod that could be fitted under the wing of the Ju-87-G immediately outboard of the main landing gear legs on hardpoints. The type first saw use with the Panzerjagerstaffel (tank destroyer squadron) on the Eastern Front with great success. The JS-2 is a snap kit but I ended up gluing some of it due to some problems I had. Construction starts with the turret and was simple and easy. Next is the upper hull and again everything went well. The fit was perfect. On to the lower hull and that's where I started to run into trouble. The suspension arms for the road wheels fit perfect but the road wheels themselves would not fit on to these and had to be sanded out a little (I found this out the hard way, yep, broke one arm....sigh) The drive sprocket and idler arm fit good and then it was time to put on the tracks. Disaster!!! The vinyl tracks have mounting tabs for the return rollers to go through and into a corresponding hole in the lower hull, a great idea as it will secure the track nicely. The tracks were just a bit short or maybe it was because they were too stiff but when I tried to put them on...A: The roller didn't fit into the holes and B: The idler arm and one roller snapped off!! I ended up pinning the roller and arm back in place but it looks a bit off now. I am not sure if it was something I did or if in fact it was the kit but BE AWARE of this assembly.