The Boeing B-29 Superfortress is a four-engine propeller-driven heavy bomber designed by Boeing and flown primarily by the United States during World War II and the Korean War. Named in allusion to its predecessor, the B-17 Flying Fortress, the Superfortress was designed for the high-altitude strategic bombing but also excelled in low-altitude night incendiary bombing, and in dropping naval mines to blockade Japan. B-29s also dropped the atomic bombs on Hiroshima and Nagasaki which contributed to the end of World War II.
One of the largest aircraft of World War II, the B-29 had state-of-the-art technology, including a pressurized cabin; dual-wheeled, tricycle landing gear; and an analog computer-controlled fire-control system that allowed one gunner and a fire-control officer to direct four remote machine gun turrets. The $3 billion cost of design and production (equivalent to $43 billion today)—far exceeding the $1.9 billion cost of the Manhattan Project—made the B-29 program the most expensive of the war.
The B-29's advanced design allowed it to remain in service in various roles throughout the 1950s. The type was retired in the early 1960s after 3,970 had been built.
A few were used as flying television transmitters by the Stratovision company. The Royal Air Force flew the B-29 as Washington until 1954.
The B-29 was the progenitor of a series of Boeing-built bombers, transports, tankers, reconnaissance aircraft and trainers. The re-engined B-50 Superfortress became the first aircraft to fly around the world non-stop, during a 94-hour flight in 1949. The Boeing C-97 Stratofreighter Airlifter, first flown in 1944, was followed in 1947 by its commercial airliner variant, the Boeing Model 377 Stratocruiser. This bomber-to-airliner derivation was similar to the B-17/Model 307 evolution. In 1948, Boeing introduced the KB-29 tanker, followed in 1950 by the Model 377-derivative KC-97. A line of outsized-cargo variants of the Stratocruiser is the Guppy / Mini Guppy / Super Guppy, which remain in service with NASA and other operators.
The Soviet Union produced an unlicensed reverse-engineered copy, the Tupolev Tu-4.
More than twenty B-29s remain as static displays but only two, Fifi and Doc, still fly 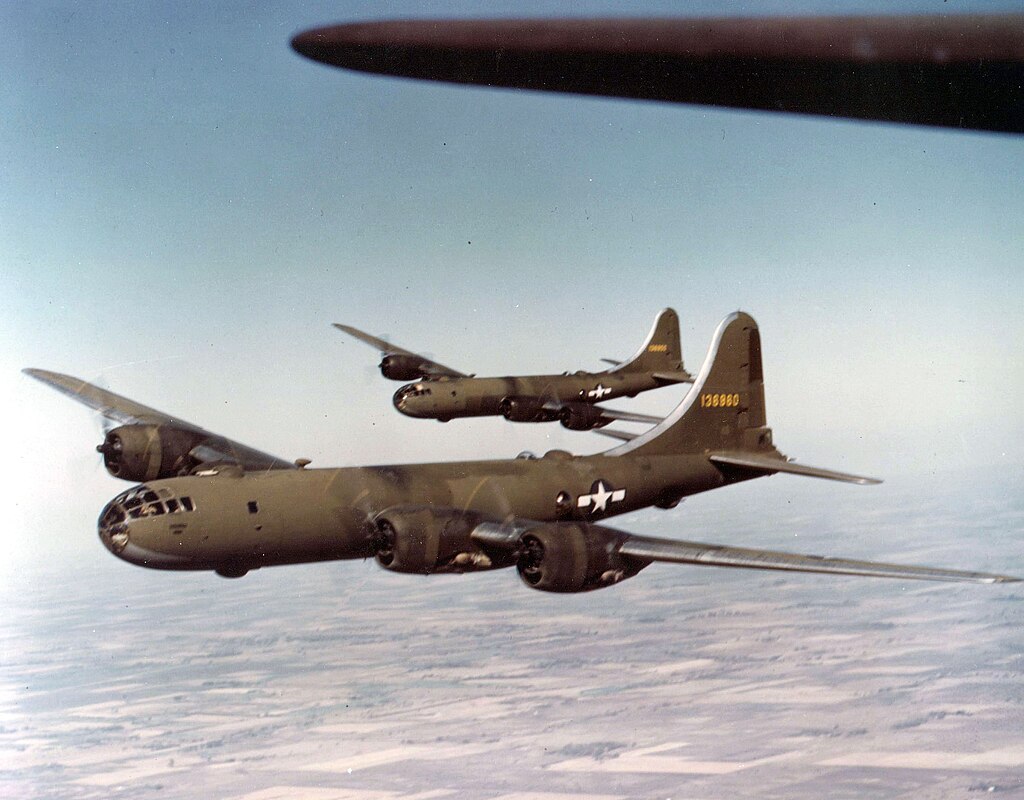